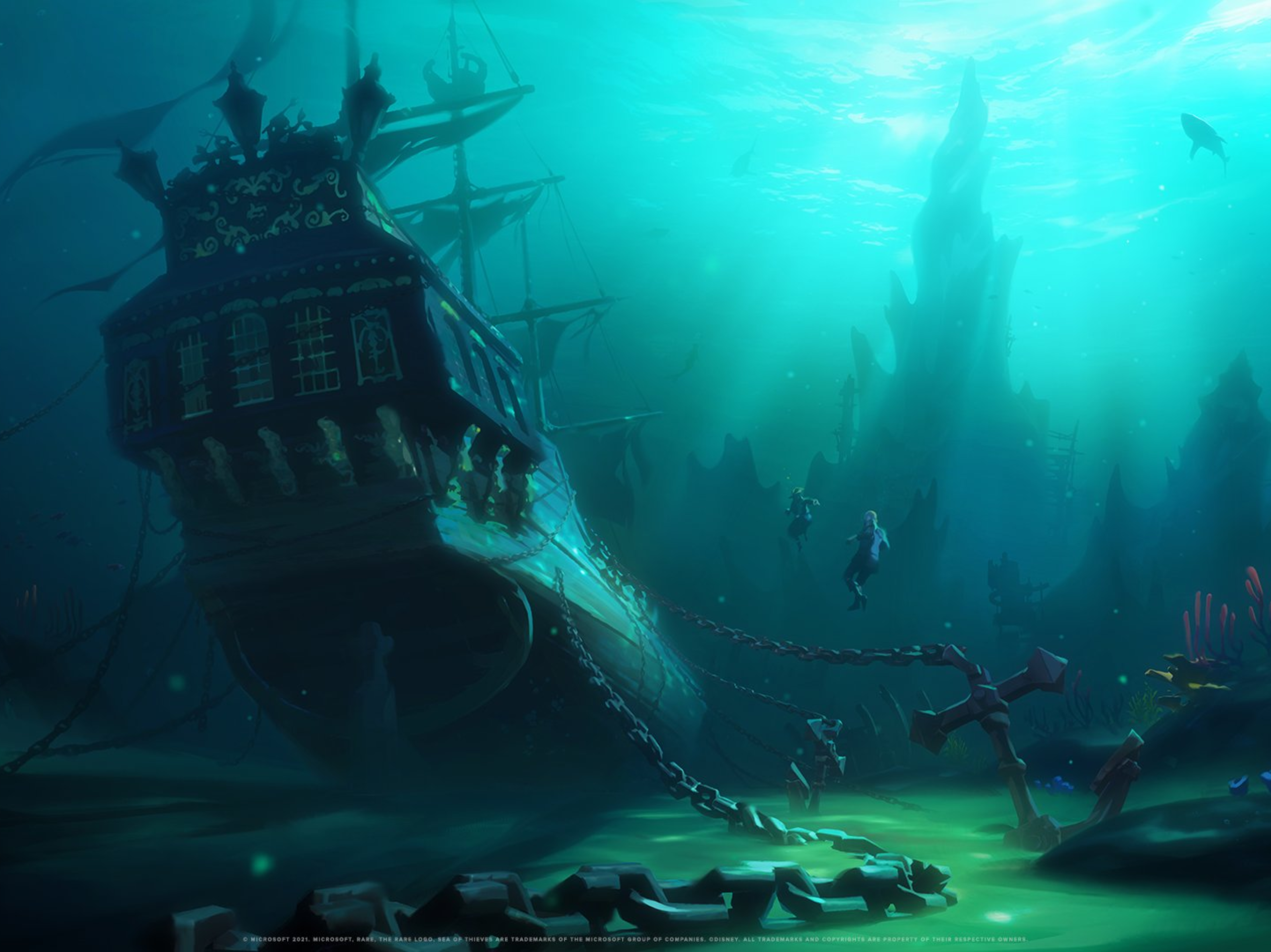 Sea of Thieves: A Pirate’s Life, everything we know so far

In just two days the most hotly anticipated update to Sea of Thieves releases. Ever since the first cinematic trailer dropped, Rare has shared wallpapers, new gameplay trailer and a now a new game showcase video. Here’s everything we know so far for Season 3 of Sea of Thieves: A Pirate’s Life.

Season 3’s ‘A Pirate’s Life’ now contains five new free Tall Tales, those Tall Tales have many checkpoints that players can stop at and come back to.

The place “where pirate dreams and nightmares take on a physical form.” The Tombs of the Damned is the area that connects Sea of Thieves to the Sea of the Damned where you are greeted with dead sailors holding up a single lantern in a row boat slowly passing by.

Based on the footage, you will then enter “haunted grotto caves.” It is here in these caves where you get your first taste of the Pirates of the Caribbean Disneyland ride and hear the well known phrase “dead men tall no tales,” before emerging into the town of Sailor’s Grave.

Rare also states that “only that crew is in that world” and Rare can “make sure” your “experience isn’t harmed by other players.” Thus far the Sea of the Damned, is the place where pirate souls go after death and get a ride on the ferry of the damned before joining the world of the living again. Based on the showcase video from today, we now know that the Sea of the Damned is accessed from the portals opened by players in the Sea of Thieves.

Rare goes on to add that the Sea of the Damned and the portals that enable access, can “link the Sea of Thieves world with whatever we want.” This statement is actually quite big news and suggests Sea of Thieves will connect to other worlds in the future.

The Tall Tales are selected from the NPC that seems like Tia Dalma, AKA Calypso from Pirates of the Caribbean but Rare has not confirmed that detail. Sailor’s Grave includes Phantom Pirates (ghost pirates) and you will have to fight off these Phantom’s while gathering clues to find and release Jack.

While on Sailors Grave the crew finds a skeleton and reattaches its head. The skeleton then laughs and says “ahh a new body at last.” According to Rare, this AI character’s name is the Cursed Captain and he will guide you around Sailor’s Grave, giving you a tour and help you find Jack.

Players will also be able to sail the Ferry of the Damned ship and battle the Flying Dutchmen with it.

Davy Jones and the Flying Dutchmen

Jack goes on to tell us about the new dangers that are coming like “cursed crews, blood thirsty mermaids, a legion of dead angry pirates and yes…”a one Davy Jones.” This is where we see ‘The Flying Dutchmen’ in game for the first time, rise out of the waters much like skeleton sloops and galleons have so many times before. Then we see the most iconic Pirates of the Caribbean villain, Davy Jones yell “Sparrow.”

Jack and his crew were not the only ones to make it to the Sea of Thieves. According to Rare, Davy Jones wanted Jack released from the Sea of the Damned and was somehow able to enter the Sea of Thieves. Davy Jones brought his ship and crew with him ready to battle and fight any crew daring enough to get in his way to find Jack. Davy’s crew seems to be able to board your ship and attack, changing the flow of ship combat with NPC’s. Not only that, these cursed crew members will also spawn on land.

A world with the eternal bliss, is a world that refuses to face the truth, nothing lasts forever, destroy them.

Jack simply responds by saying “well I believe now is the perfect time to use these cannons.” Its right about at this point where we see a crab squeaking and walking around on one of the cannons. Does this mean we are getting a Crab pet next? Davy Jones then says “A world with the eternal bliss is a world that refuses to face the truth, nothing lasts forever, destroy them” Is Davy Jones threatening the eternal life of a pirate? The life of a pirate in Sea of Thieves is one of death and eventual respawn, is that what Davy Jones is after?

According to Rare, the Sunken Kingdom is accessed by swimming down “deeper than players have every been able to before” to the sunken Black Pearl to retrieve the compass as it “is the key to what players will need to save the Sea of Thieves.”

When entering the Sunken Kingdom you enter on the sunken Black Pearl which is dragged into the Siren Citadel by chains.

Players will be able to venture inside these structures which are made up of coral and sunken ships.

Rare says they used bright colors to help direct player’s eyes towards their objective in the game.

The new Sunken Kingdom creatures include Siren’s and female Siren commander who is confirmed as the mother of the kraken, according to Rare. The Siren’s seem to be taking orders from Davy Jones himself.

Sirens can fire a song note at you or do a scratch attack. Sirens are also capable of using the gem on their chest to create a damage field around them much like Mermaid statues that heals other Sirens around them and hurts their enemies. Siren’s travel in packs of at least three with one leader in the bunch that wields the Trident of Dark Tides that you can obtain after defeating them. Above the surface, players will attempt to destroy huger Siren statues.

These large crustations are known to the Sea of Thieves because they are called Ocean Crawlers and Ocean Crawler cosmetics have existed in game for a long time. Ocean Crawlers are a new land-based threat. One type is the Crab Ocean Crawler (large red one), the Electric Ocean Crawler who will fire electric-based attacks at you, dash at you and use electric shields. The third Ocean Crawler is the Hermit type who burrows underground leaving to attack you with toxic spores and charges at you to damage your health too. Ocean Crawlers are in service to the Sirens and look like they have the three mermaid gems in their chests and like the mermaid statues found around the Sea of Thieves, each color represents a different level of difficulty and reward. After defeating these monsters, they probably drop mermaid gems at the very least. Jack Sparrows seems to be able to join in the fight, but we are not sure this happens regularly.

While players have encountered the Kraken above the surface, players will have to defeat the Kraken below the surface too. Also this is the first time we get to see the Kraken’s face.

Players can interact with the Siren statues that will intact change in the environment and could open doors to new areas of allow water to come into a room and raise you up to a level you could not reach before.

The Trident of Dark Tides

Here is where we see the legendary Black Peral chained to the ocean floor about to be dragged into the Siren Citadel.

The Ferry of the Damned

For the first time ever, players will be able to sail the Ferry of the Damned and battle Davy Jones’ crew aboard the Flying Dutchmen.

There is a shot of this ship (image above) in the new showcase video and it looks like an entirely new ship found in the Sunken Kingdom. Judging by the footage, this ship is very large and features at least twelve cannons and a side-covered second deck with two larger sails.

We meet him locked up trying to get the keys from a dog using a bone. Sound familiar? It should, this resembles a scene with Captain Jack Sparrow in Pirates of the Caribbean. How will Jack Sparrow fit into the story you ask? Judging by the trailer above, it looks like he will be an NPC (non-player character) companion that will guide and instruct you and your crew on new adventures. Not only that, Jack will fight your enemies, battling monsters that board your ship and even fire your cannons. It isn’t clear at this time if Jack can fight enemy players in the Sea of Thieves or just in the Sea of the Damned or if you can travel back to the Sea of Thieves with Jack on your ship.

The we get some humor from Jack and a look at a new ship set coming to Sea of Thieves. Don’t get your hopes up that there is a new ship type in the game, this just looks like a Black Pearl themed ship set and in the image below a galleon is shown. The panning out we see pirates with Jack Sparrow style cosmetics and a new dog breed seen in the first trailer.

Who’s playing Sea of Thieves on June 22nd? Let us know in the comments, discuss on Twitter.