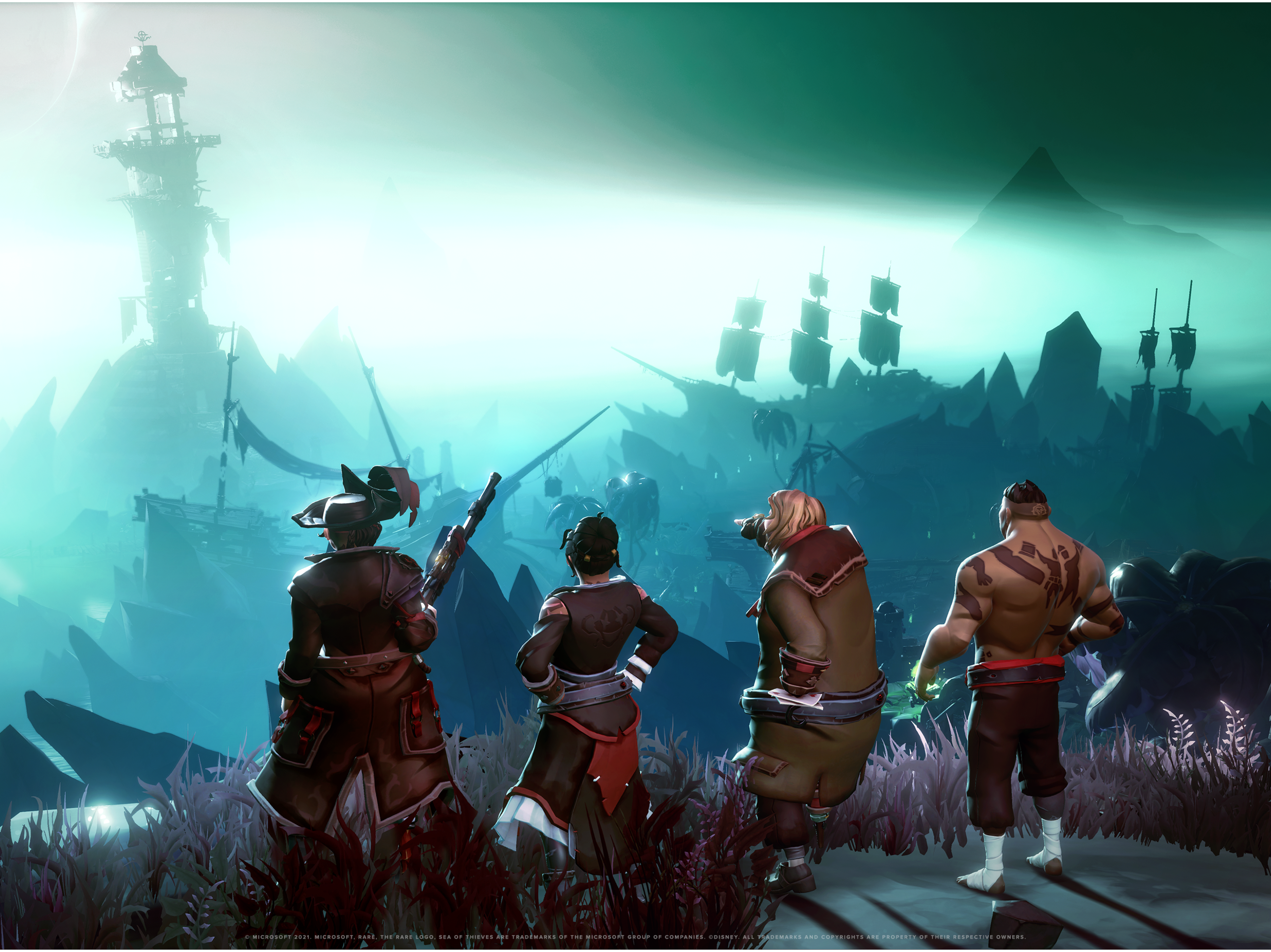 Season 3 of Sea of Thieves: A Pirate’s Life explained

The biggest and most hotly anticipated update to Sea of Thieves is just over the horizon, set to release five days from now on June 22. Ever since the first cinematic trailer dropped, Rare has shared wallpapers and a new gameplay trailer. So, let’s take a minute and review and discuss what’s coming in Season 3 of Sea of Thieves: A Pirate’s Life.

The trailer opens with the classically themed opening to the Pirates of the Caribbean, but this time instead of a Jolly Roger flag we see a Rare flag. Then a hooded female that sounds like Tia Dalma A.K.A. sea goddess Calypso in the Caribbean universe. She tells a pirate crew of the dangers that lay ahead and must save the life of one man.

In order to save the one Tia Dalma is talking about, the crew is tasked to journey to the Sea of the Damned. Thus far the Sea of the Damned, is the place where pirate souls go after death and get a ride on the ferry of the damned before joining the world of the living again. Can pirates now sail these seas or is it restricted to one of the five Tall Tales? The wallpaper below depicts an adventure on an island in the Sea of the Damned and seems to suggest these seas now have an expanded role in the game.

Back to the one Pirate’s life we must save, we meet him locked up trying to get the keys from a dog using a bone. Look familiar? It should, this resembles a scene with Captain Jack Sparrow in Pirates of the Caribbean. How will Jack Sparrow fit into the story you ask? Judging by the trailer above, it looks like he will be an NPC (non-player character) companion that will guide and instruct you and your crew on new adventures. Next, we need to rescue the best first mate one could ask for, Mr. Gibs. We see him locked within a coral holding cell. Mr. Gibs tells the crew that Jack had stolen a treasure and that darkness would follow. But it’s unclear if Jack stealing the treasure is why we first meet him locked up. Our adventures discovering and rescuing Pirates doesn’t stop there. The crew finds a skeleton and reattaches its head. The skeleton then laughs and says “ahh a new body at last” which sounds a lot like everyone’s favorite Anti-hero Pirate, Captain Barbossa. The last time we saw Barbossa, was when he heroically sacrificed himself to save his newfound daughter’s life in Pirates of the Caribbean: Dead Men Tell No Tales from 2017.

Jack goes on to tell us about the new dangers that are coming like “cursed crews, blood thirsty mermaids, a legion of dead angry pirates and yes…”a one Davy Jones.” This is where we see ‘The Flying Dutchmen’ in game for the first time, rise out of the waters much like skeleton sloops and galleons have so many times before. Then we see the most iconic Pirates of the Caribbean villain, Davy Jones yell “Sparrow.”

Jack and his crew were not the only ones to make it to the Sea of Thieves. It would seem they were followed or hunted by Jack’s most famous adversary. Davy freaking Jones and he brought his ship and crew with him ready to battle and fight any crew daring enough to get in his way to find jack. Davy’s crew seems to be able to board your ship and attack, changing the flow of ship combat with NPC’s. Not only that, these cursed crew members will also spawn on land.

A world with the eternal…is a world that refuses to face the truth, nothing lasts forever, destroy them.

Jack simply responds by saying “well I believe now is the perfect time to use these cannons.” Its right about at this point where we see a crab squeaking and walking around on one of the cannons. Does this mean we are getting a Crab pet next? Davy Jones then says “A world with the eternal…is a world that refuses to face the truth, nothing lasts forever, destroy them” Is Davy Jones threatening the eternal life of a pirate? The life of a pirate in Sea of Thieves is one of death and eventual respawn, what is Davy after here?

After Davy Jones’ legendary monologue and epic shockwave, we see pirate adventures ensue like a chase by ghost pirates through the streets of the island in the Sea of the Damned which resembles Port Royale by the way. We also get our first look at a new energy weapon which seems to knock out a monstrous crustation from Davy Jones’ crew with one highly charged blow. Jack responds with “I don’t suppose there is a second one of those.”

There seems to be at least four of these monsters and this includes one female commander of some sort, who is confirmed as the mother of the kraken, based on the trailer below. They also seem to be taking order from Davy Jones himself.

These large crustations look like they have the three mermaid gems in their chests and like the mermaid statues found around the Sea of Thieves, each color represents a different level of difficulty and reward. After defeating these monsters, they probably drop mermaid gems at the very least. Jack Sparrows seems to be able to join in the fight, but we are not sure this happens regularly.

From here we get to see an escape right out the mouth of what looks like the same face on the dreaded and highly valuable Chest of Sorrows and then several blasts from the new weapon blowing through a tower on the island in the Sea of the Damned. In the next scene we see a large-scale confrontation where the Flying Dutchmen and several newly styled ghost ships face a number of player ships before Jack says “The Sea of Thieves Aye…bring me that horizon.”

Another major destination seems to be past the large mermaid statues, past the ghost ships and to that island under the Davy Jones’ shaped cloud, final boss battle…maybe.

“It’s time to bridge the worlds and take our place as lords of the seas,” Davy Jones exclaims.”

Now we have awoken and we are hungry,” a female voice says as we see shots of sea monsters and the kraken. The we get some humor from Jack and a look at a new ship set coming to Sea of Thieves. Don’t get your hopes up that there is a new ship type in the game, this just looks like a Black Pearl themed ship set and in the image below a galleon is shown. The panning out we see pirates with Jack Sparrow style cosmetics and a new dog breed seen in the first trailer.

Who’s playing Sea of Thieves on June 22nd? Let us know in the comments, discuss on Twitter and welcome our new contributor Dwayne Shea to the Platform De.Central team.