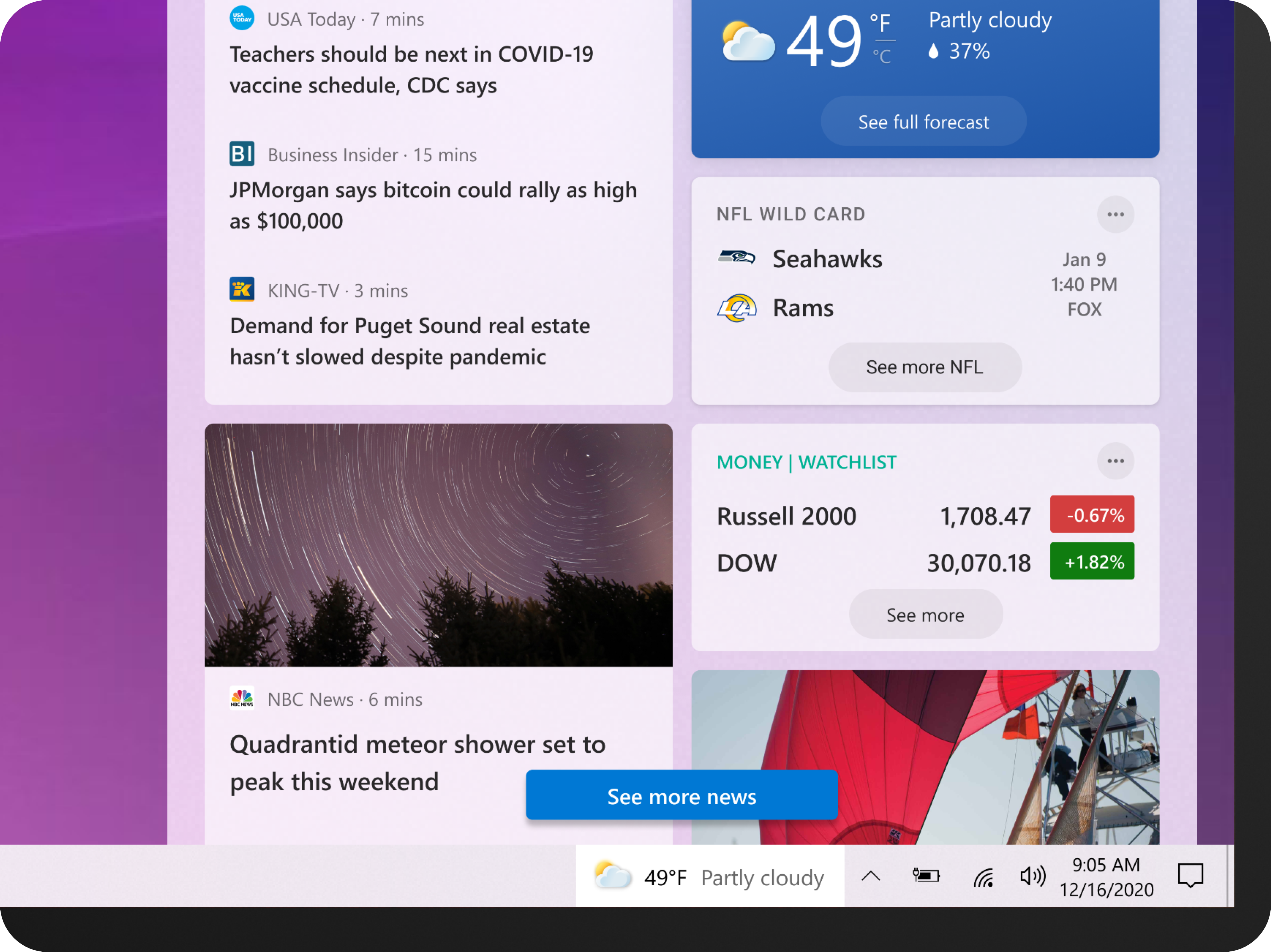 Windows 10 major interface refresh for 2021 has started to rollout

Microsoft has announced and launched ‘news and interests on the taskbar’ in the Dev Channel for Windows 10 insiders. This isn’t the only new feature in this build, a modernized Storage management app has been launched as well.

News & Interests on the taskbar

Brandon LeBlanc of Microsoft announced the new feature via the Windows Insider Blog. After a long period of time without any new features added to Windows 10, Windows 10 Insider Preview Build 21286 (RS_PRERELEASE) comes with a new taskbar feature that further clutters up the taskbar. Users are waiting for refinements like rounded tile corners, a Windows 10X inspired Start menu, more Fluent Design touches added to the inbox apps and more. “With news and interests on the Windows taskbar, you get quick access to an integrated feed of dynamic content such as news and weather that updates throughout the day.”

“You can personalize your feed with relevant content tailored for you. Instead of switching between apps or your PC and phone to stay up to date with the news and interests you care about – seamlessly peek into your feed directly from the taskbar anytime you want throughout your day.”

You can now create and manage Storage Spaces from within the Settings app. This includes creating storage pools and storage spaces, adding, and removing disks, and optimizing pools. This new experience provides an accessible, modern experience integrated with other storage features.

Go to Settings > System > Storage and click the Manage Storage Spaces under “More storage settings” to get started.

This feature is rolling out to a subset of Insiders in the Dev Channel at first, to help us quickly identify issues that may impact performance and reliability. Rest assured they will be gradually rolled out to everyone in the Dev Channel.

As some Insiders have noticed, we’re working on an enhancement to the file system utilities family – called DiskUsage, enabling users to view and query disk space usage via the command line. With DiskUsage, you can now track files and directories which are consuming excessive amount of space on the drive. It scans the specified directory recursively or the entire drive with detailed information on how much each subfolder is using. It also supports extensive filtering and output customization options.

This will display the used space under each folder of the current directory.

Get started today by typing diskusage /? in a command line window for more options and usage information.

We have added an option that allows you to run any specified Linux command on startup of a WSL distribution. You can accomplish this by editing the /etc/wsl.conf file in your distribution and adding an option titled “command” under a section titled “boot”. This command will run whenever your specific WSL distribution starts up. The example below shows using this functionality to create a method to log the time and date for each startup of this WSL distro.

Improving your experience when transitioning between time zones

Based on feedback, we’re making a couple small adjustments for users of “Set time zone automatically” in Date & Time Settings:

Other updates for Insiders

Since the initial release of Windows File Recovery, the team has received tons of feedback and inquiries about the app. This update includes performance improvements, bug fixes, and the introduction of 2 simplified recovery modes! Regular mode is a fast recovery option for NTFS file systems and extensive mode is a thorough search that applies to most file systems. The update is available to Windows Insiders and will be released to the general public (Windows 10 May 2020 Update and higher) in early 2021. If you don’t have Windows File Recovery installed, you can download it here from the Microsoft Store.

You can check out our Windows Insider Program documentation here, including a list of all the new features and updates released in builds so far. Are you not seeing any of the features list for this build? Check your Windows Insider Settings to make sure you’re in the Dev Channel. Submit feedback here to let us know if things weren’t working the way you expected.

If you want a complete look at what build is in which Insider ring, head over to Flight Hub. Please note, there will be a slight delay between when a build is flighted and when Flight Hub is updated.

Windows 10 major interface refresh for 2021 has started to rollout