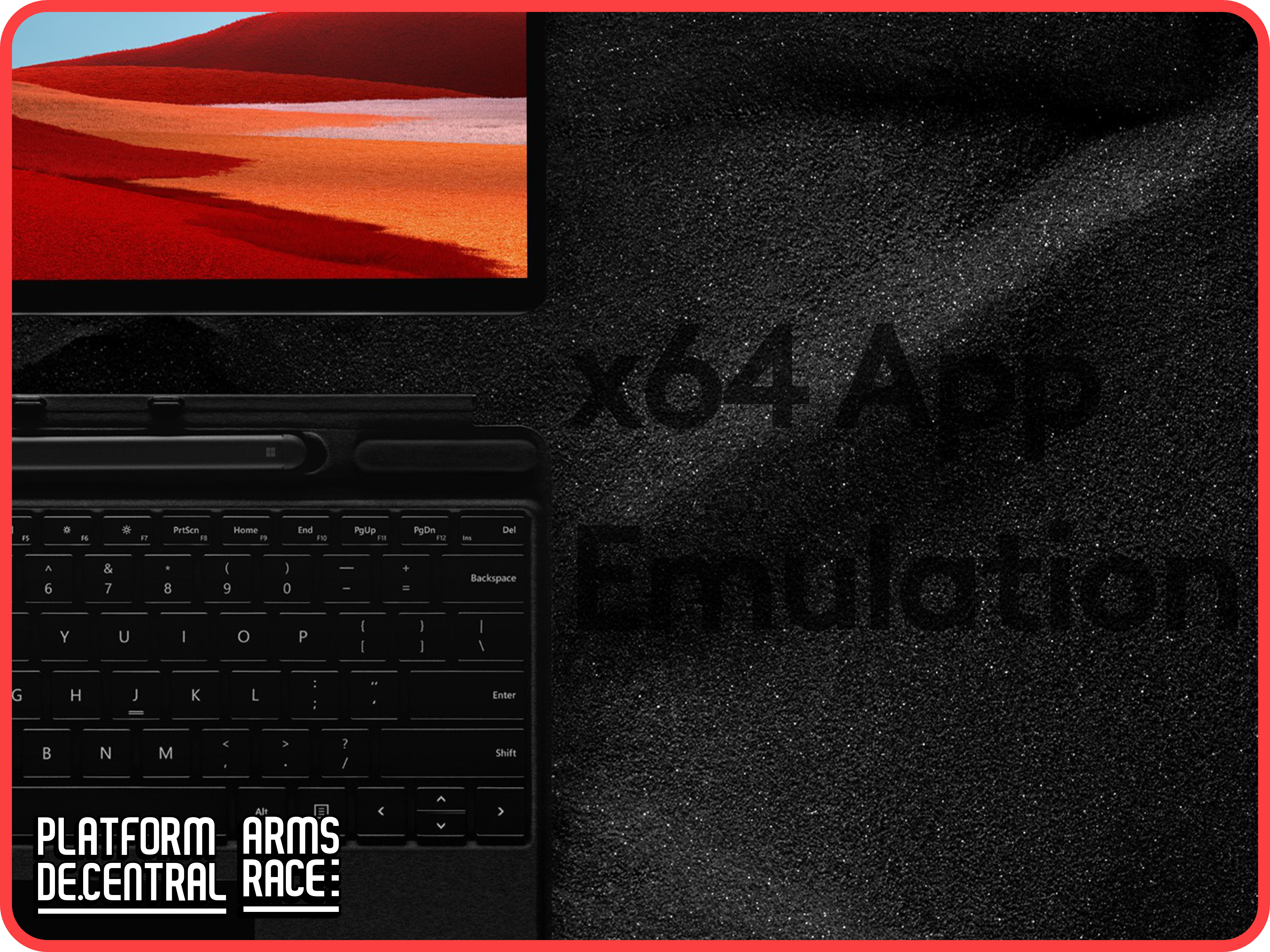 One of the major things that has held wide-spread adoption of Windows on ARM back has been app compatibility. Microsoft recently announced Windows 10 on ARM would be added to the App Asure program in which Microsoft works with companies that deploy ARM PC’s to make sure that all their required apps are compatible. But today’s news goes even further in ensuring Windows 10 on ARM’s future market success.

Today Microsoft is releasing the very first preview of the long awaited and promised for November x64 app emulation for ARM64 devices.

Get started with x64 app emulation

If you are currently a Windows Insider on Dev build 21277 you can follow the instructions below, if not join here.

In this preview, you can install x64 apps from the Microsoft Store or from any other location of your choosing. You can try key x64-only productivity apps like Autodesk Sketchbook, as well as games like Rocket League. Other apps, like Chrome, which run today on ARM64 as 32-bit apps, can run as 64-bit using the new x64 emulation capability. These apps may benefit from having more memory when run as 64-bit emulated apps.

Currently Microsoft is suggesting that the best app performance can be found on the Surface Pro X (SQ1/SQ2), Lenevo Flex 5G and Samsung Galaxy Book S with drivers available below.

Microsoft is suggesting you also install a preview version of ARM64 C++ redistributable from the following link, https://aka.ms/arm64previewredist. “These steps will not be required in future Insider Preview builds.”

The history of ARM PC’s

It came with a built-in kickstand, which meant it could be propped up by itself for watching movies or for Skype calls. It included a magnetic keyboard attachment for an impossibly thin and futuristic keyboard design, a full-size USB-A port, mini HDMI and a magnetic power cable attachment called Surface Connect.

Microsoft’s Surface introduced a brand-new form factor to convertibles. While many other convertible designs have been tried, abandoned or refined, it is the Microsoft’s Surface design that has withstood the test of time. The kickstand enabled the tablet to adjust viewing angles and the Touch Keyboard was impossibly thin but didn’t offer any key travel, instead utilized haptics to emulate key presses. There was an optional, slightly thicker ‘Type Cover’ keyboard that utilized a low-profile butterfly design instead.

Fast forward to today, Microsoft announced today that via a blog post that Microsoft is expanding their efforts with Windows 10 on ARM.

Microsoft is delivering a “native Microsoft Teams client optimized for Windows 10 on ARM.” With remote meetings being so common place in 2020, this addition seems quite belated, but much appreciated.

Microsoft also announced “support for running x64 apps, with x64 emulation starting to roll out to the Windows Insider Program in November.

Microsoft is also delivering tools for developers with “Visual Studio code has also been updated and optimized for Windows 10 on ARM.

As I mentioned above, Microsoft is “committed to helping them ensure their apps work with Windows 10 and Microsoft 365 Apps on ARM64 devices with App Assure.”

This is proof that there is work being done to support x64 app emulation for ARM64 PC’s and now we have a timeline.

Microsoft just release its second-generation Surface Pro X with the SQ2 chip which is a slight upgrade over the SQ1.

How many of our readers will consider an ARM powered Windows PC now that you can emulate x64 apps? Let us know in the comments below.