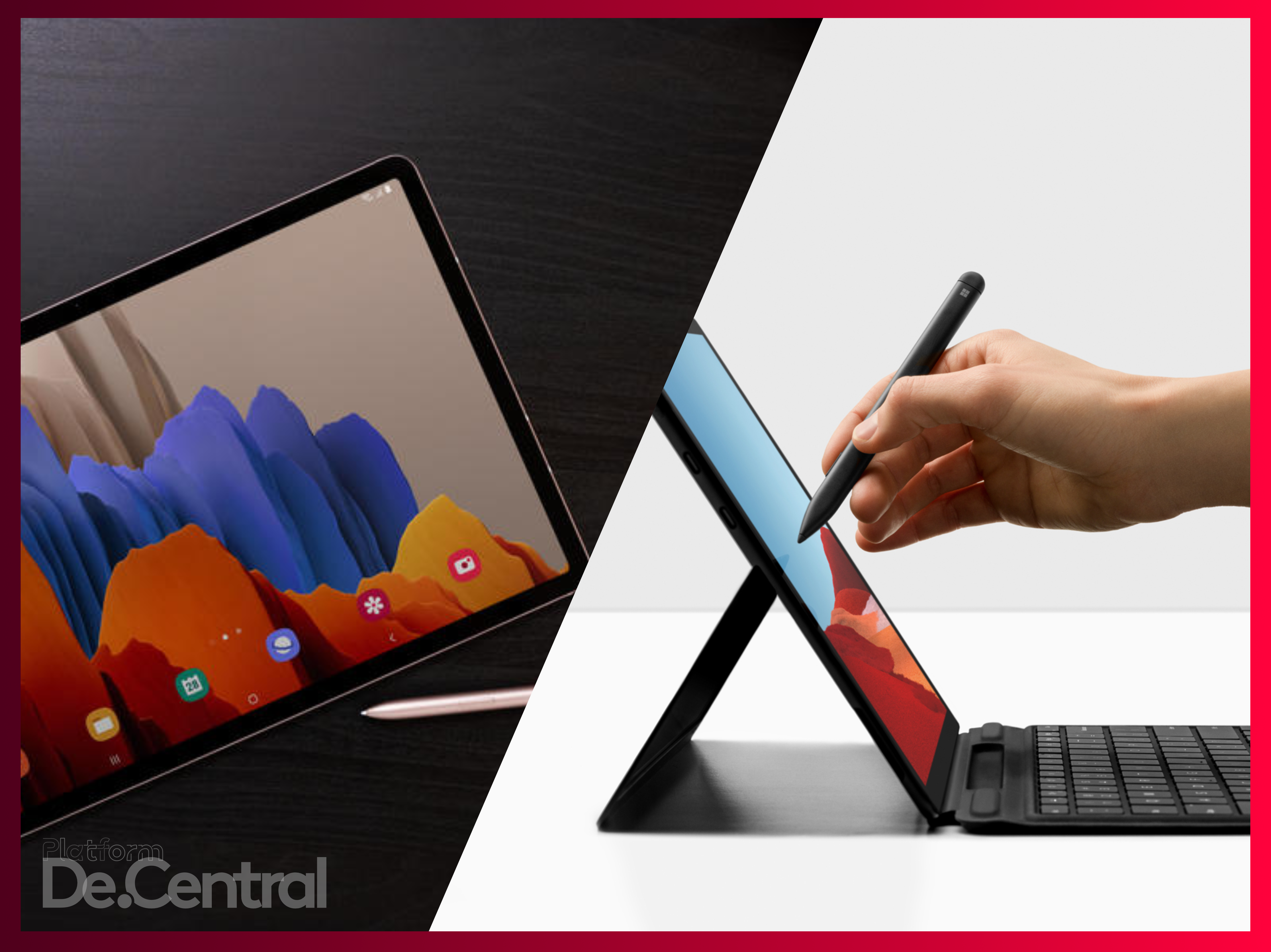 Samsung just announced its refreshed Galaxy Tab S models recently, faster ARM-based CPU’s, light and thin design, made for equal parts work + play and totally mobile with the available 5G option. This is a breed of computer that our readers are familiar with, always-connected, instant-on and lasts all day and keeps going. Apple’s iPad Pro line and Microsoft’s Surface Pro X are two stand out models that come to mind, each of them exemplifies the pinnacle of each of their respective eco-systems and are direct competitors to Samsung’s new Galaxy Tab S line. The contender from the United States, Microsoft’s Surface Pro X takes on the vs the contender from South Korea, the Galaxy Tab S7+ 5G.

For the sake of simplicity and our sanity I will refer to the Galaxy Tab S7+ 5G henceforth in this article as just Galaxy Tab. Samsung is perhaps the last major OEM to still build a serious Android tablet and while Apple’s iPad is a better tablet, the Galaxy Tab is more like Microsoft’s Surface Pro X. With Dex Mode and the optional Keyboard, the Galaxy Tab turns itself into a productivity focused 2in1 much like the Surface Pro X can.

Both machines are built for equal parts work and play as they both have access to the best productivity and creative apps in their respective app stores and both can access game streaming services such as xCloud, which is included in Xbox Game Pass Ultimate (Sept. 15th), Stadia, Nvidia GeForce Now and others. Cloud Game streaming services like these enable you to own a modern light-weight always connected 2in1 instead of a heavy gaming laptop. With Samsung’s optional addition of 5G, the extra speed enables you to game from nearly anywhere without sacrificing your competitive edge through your connection speed.

Total including the Keyboard and S Pen: Unknown but could be = $1,237

We suspect that even though the Galaxy Tab is only $849 for the Wi-Fi version the 5G version will start out at about $999 when the pricing is revealed. Because even the accessory pricing is unknown, we instead looked at the Galaxy Tab S6 keyboard and S Pen prices. When we added both devices up with their respective accessories, we found only a $31 difference.

The choice between the two may just come down to what you want/need this device for and what eco-system you want to be in. At the end of the day Android is still Android, Samsung is offering 3-years of updates to their devices but Microsoft’s Windows 10 will go way beyond 3-years. Right now, you can install Windows 10 on a 10-year old laptop and have a modern and secure OS on old hardware. 10 years from now the same can be said for Surface Pro X, because this is just Windows 10 and it will be updated for a very long time to come.