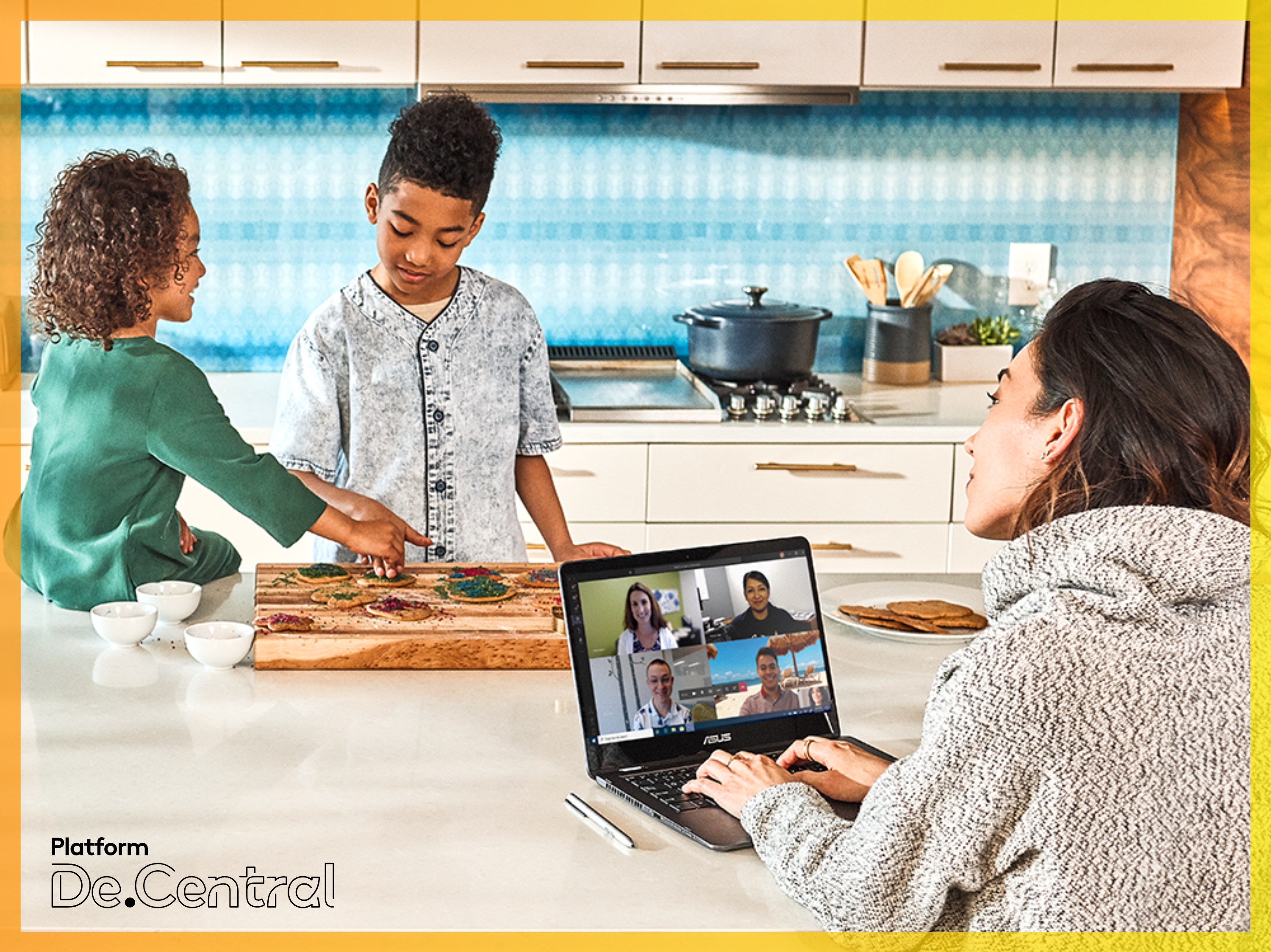 Many of us have been working remotely for many weeks now as employers began sending their employees home and schools shutdown for the remainder of the school year in an effort to flatten the curve. We have seen many challenges in making this new reality work in how do we manage our kids remote learning and our remote work life at the same time.

Over the past several weeks we have reported on story after story about remote work, remote learning, teleconferencing and all the security holes in Zoom ( 😱 lots of stories about Zoom lax security).

Microsoft published a trend report on remote work and meetings:

To explore changing trends in remote work and learning further, today we’re releasing the first report from our new Work Trend Index. Through ongoing research, we will explore how work is changing via surveys and interviews, and by looking at trends in the way people interact with our productivity tools.

This first report explores how people are learning to connect as a team when they need to work apart. Our goal in sharing these insights is twofold. First, while safeguarding personal and organizational data, we want to help our customers learn from the bright spots and plan for the future. Second, we aim to use these insights to guide innovation in our products so that we can continue to build the best possible experiences.

As the world works in Microsoft 365, searches in Bing, and connects on LinkedIn, it creates trillions of signals—like emails, meetings, searches, and posts—that form the Microsoft Graph, one of the largest graphs of human interactions at work in the world. Trends in this data provide a unique view into the world’s productivity patterns.

Microsoft takes privacy seriously. We remove all personal data and organization-identifying data, such as company name, from the data before using it to produce reports. We never use customer content such as information within an email, chat, document or meeting to produce reports. Our goal is to discover and share broad workplace trends from aggregated data from the Microsoft Graph.

People are finding a human connection through video

Researchers like Dr. Fiona Kerr have found that eye contact and physical connection with another human increases dopamine and decreases the stress hormone cortisol. Her research shows that you can even physically calm someone down simply by looking them in the eye. So as the world works remotely, it is no surprise people are turning on video in Teams meetings two times more3 than before many of us began working from home full-time. We’ve also seen total video calls in Teams grow by over 1,000 percent in the month of March.4

As we looked at countries with the most active Teams users, we saw people in Norway and the Netherlands turn on video most, with about 60 percent of calls including video. People in Australia use video in meetings 57 percent of the time, Italy 53 percent, Chile 52 percent, Switzerland 51 percent, and Spain 49 percent. Meanwhile people in the U.K., Canada, and Sweden use video 47 percent of the time and people in Mexico and the U.S. use it 41 percent and 38 percent respectively.

Who doesn’t use video as much and why? People in India use video in 22 percent of meetings, Singapore 26 percent, South Africa 36 percent, France 37 percent, and Japan 39 percent. This may be attributed in part to less access to devices and stable internet in some regions such as India and South Africa.

We’ve been inspired by the ways our customers are using video to connect during this time. For example, The 2nd Affiliated Hospital of Wenzhou Medical University, the largest hospital in Wenzhou, China, deployed Microsoft Teams to enable healthcare staff inside the quarantined section of the hospital to communicate with non-quarantined staff, allowing for secure coordination of patient care while ensuring the health and safety of their workforce.

While there is no true replacement for in-person collaboration, we’re working harder than ever to quickly innovate to decrease pain points, increase human connection, and make work a bit more fun.

People are using video to connect in new ways

As companies adapt to full-time remote work, we’re seeing more leaders use virtual town halls to connect employees on a large-scale basis. Large conferences and events are also moving online. We’re also seeing more people take advantage of the ability to record Teams meetings—such as a teacher recording a lesson for students or a worker recording a meeting for an invited colleague to view later.

Microsoft Stream is the service that powers live events and meeting recordings in Teams. As a result of customers moving events online, the number of Stream videos in Teams per week has increased over five times in the last month with hundreds of hours of video uploaded per minute.

Nuance, which uses AI to solve some of the world’s toughest problems in healthcare, financial services, telecommunications, government, and retail, turned their global R&D conference—planned to take place in Montreal—virtual in a matter of days. Organizers connected hundreds of attendees with a Teams channel and PDF agenda that linked to each Teams event session. Last year Nuance spent approximately $700,000 on the conference and this year the cost was close to zero, with no carbon impact from global travel.

Productivity is different for everyone. The so-called larks of the world are more productive in the morning, while night owls are more creative and focused in the evening. Our data shows that a more flexible workday created by remote work is allowing people to work when it’s best for them.

From March 1–31, the average time between a person’s first use of Teams and last use of Teams each day increased by over one hour. This data doesn’t necessarily mean people are working more hours per day, rather that they are breaking up the day in a way that works for their personal productivity or makes space for obligations outside of work.

As organizations aim to continue operations, we’ve seen a considerable increase in Teams usage on mobile devices such as a phone or tablet. The number of weekly Teams mobile users grew more than 300 percent from early February to March 31. Some of our largest usage increases have been from customers in industries most impacted by the outbreak. With 183,000 tenants in 175 countries using Teams for Education, we’ve seen large increases in usage of Teams on mobile devices from customers in Higher Education and Primary and Secondary Education (K-12). We’ve also seen a notable increase from customers in Government-related industries.

When you consider this from a capacity perspective, it’s not just about the number of new users, but the amount they are using it each week—what we refer to as engagement. Engagement in Teams on mobile devices has increased exponentially in several regions most impacted by the crisis including Netherlands, Italy, Spain and France.

One example of a school transitioning to remote learning is Durham University in North East England. Classes had to move online and staff needed to work remotely so that the university could continue to serve its students, academics, and professional services during the outbreak. To respond effectively to the developing crisis, Durham University scaled up its use of Microsoft Teams to add to its online learning toolset, maintain community, and make it possible to collaborate and communicate remotely and securely on the device that works best for their students and staff.

Trends in the data and conversations with our customers show us the world is realizing we can effectively connect across distances in a way some never thought possible before. For example, despite some employees returning to work, there are still more than two times the number new Teams users each day in China compared to end of January.6 The number of daily active Teams users in China also continues to grow week over week. We can also learn from customers who are showing it’s possible to continue their mission while forced to work apart.

For instance, Mercy Housing, a non-profit committed to creating affordable housing options, implemented technology, including Microsoft Teams, to maintain continuity in the face of COVID-19. “The capability to conduct virtual meetings and collaborate on documents in a single place has been instrumental as many of our 1,600 employees shifted to remote work practically overnight. In some cases, our resident services staff is exploring the use of Teams video meetings to maintain a human connection with our residents, which is so important to supporting mental and emotional well-being in a time like this. This remote teamwork has allowed us to help our 45,000 vulnerable residents stay in their homes,” accounted Gunnar Tande, CIO and Senior Vice President, Technology & Strategy, Mercy Housing.

Even in the face of the COVID-19 pandemic, The Salvation Army is continuing efforts to address the needs of those they serve, including housing the homeless and feeding the hungry. Tim Schaal, Information Technology Director for The Salvation Army United States Western Territory, noted that despite the swift transition to remote work for thousands of employees, “Microsoft Teams allowed us to continue providing critical assistance in cities and towns, big and small, throughout the thirteen western states.”

We are so glad to see that our technology is helping these organizations continue their important work. At Microsoft, our mission is to empower every individual and every organization on the planet to achieve more. And at a moment like this, when we are all adjusting to a new normal, it’s never felt more important to help connect more people and keep more organizations up and running with secure tools. Although the way we work has changed, our customers show us every day that our drive to connect to one another is so often stronger than the circumstances that keep us apart.