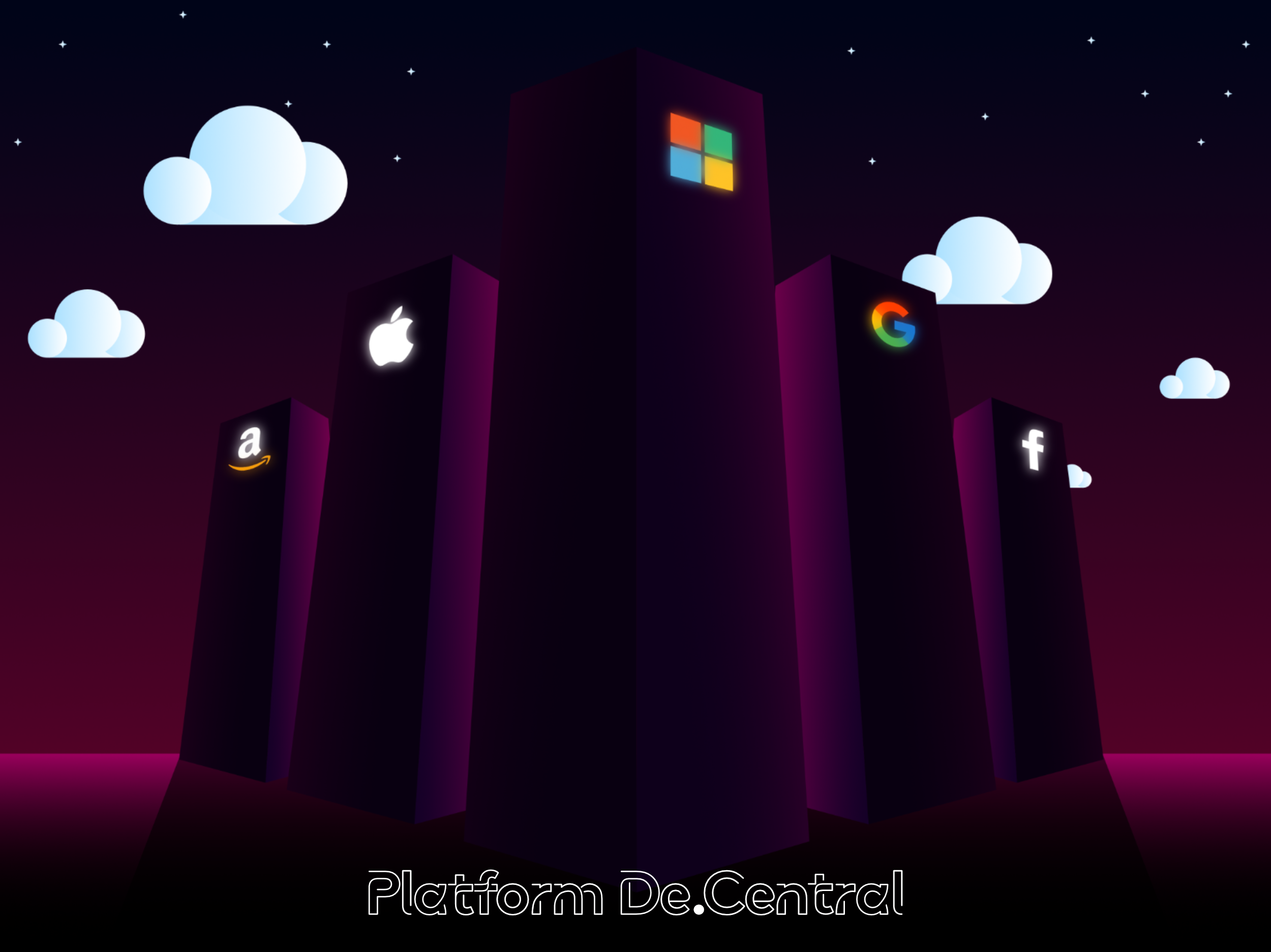 The Land of Trillion Dollar Goliath’s

Now is the time to De.Central-ize Platforms, because the Platform’s owned by the subjects of yesterday’s hearing Google, Apple, Facebook & Amazon are suppressing a healthy competitive market.

This is the reason Platform De.Central exists, to bring awareness to this very subject. We do not have a healthy mobile platform market, because there are only to choices of a platform to choose from. How is it that so much of the market is directed by two California based companies, with a shared world view that other parts of the country and world do not share.

Yesterday a Senate sub-committee focused in on what a witness described as a “Dire Threat” to the digital market place for which Google currently plays monopolist by its stranglehold over Apps & Services though its Gatekeeper service. This practice suppresses any newcomer from directly competing or even gaining any traction against large in-trenched rivals.

She went on to say “If entrepreneurs and business people bring their hard work and the best products, services and ideas forward, an open and freely competitive market rewards them with success and prosperity.”

It hasn’t been that way recently, it has been suppressed by powerful entities seeking to profit through mergers and monopolization, which deprives consumers of “choice, innovation, quality and pricing structures that come from real competition”, Hubbard said.

“Powerful entities seeking to profit through mergers and monopolization, which deprives consumers of “choice, innovation, quality and pricing structures that come from real competition”

A new Antitrust bill was introduced by the ranking member of the Judiciary Committee Sen. Amy Klobuchar and co sponsored by Sen. Richard Blumenthal and Sen. Cory Booker. It is called “The Anti-competitive Exclusionary Conduct Prevention Act and it is design to deter “anti-competitive exclusionary conduct that harms competition an consumers” this would enhance authority of the DOJ and FTC to enforce antitrust laws.

This would enable new civil penalties (up to 30 percent of revenue) to be set by the FTC for violations of the Clayton Act (1914 law that prohibits merging of two companies when the effect substantially lessons competition.

The elephant in the room of course was Google Search, which is the poster child for anti-competitive, abusive behavior. In the European Commission’s finding last year, they found Google had introduced restrictive clauses in contracts aimed at suppressing advertising rivals and engaging in “illegal misuse of its dominant position int he market  for the brokering of online search adverts.” Because of that the commission set a 1.49 billion in Euros as a fine.

“Google’s exclusion of third party competitors” in search results was not the result of concern for its user experience, nor “borne out of any technical necessity.” Instead, he argued: “It was designed to leverage Google’s extraordinary power in one market for the benefit of its position in adjacent markets” Luth Lowe exclaimed to lawmakers, who is a very vocal critic of Google’s Search practices.

Lowe went on to say “There are many other quantifiable ways to demonstrate Google’s deceptive self-preferencing is worse for consumers than pure competition. These include comparing the number, quality, and distribution of user ratings and reviews offered by different local search providers or looking at how well different providers weed out false or biased information. Perhaps the most damning indictment of Google’s quality was that, for years, the search behemoth’s own PageRank-style quality scores suggested its local review content belonged dozens of pages after the first page. When antitrust authorities were shown how poorly the Google organic algorithm ranked Google’s local review product, Google hid the ball, de-indexing all of its review content so enforcers could no longer monitor the overt bias.”

The other side of the argument was vocalized by Morgan Reed who is president of the App Association. It represents some 5000 app companies in the US and EU. He explained, “Consumers and developers experienced significant changes since the introduction of various mobile software platforms,” Reed said. “In addition to having more choices, consumers also benefit from lower prices for software and even access to new markets that did not previously exist. Similarly, developers benefit from lower overhead costs, built-in consumer trust, and wider distribution and market access.”

Reed went on to say “choice has exploded since the advent of these platforms, such as the Apple App Store, which generated over $50 billion in 2018 and whose top search results “are some of the most fought after real estate in the online economy,” as the New York Times explained in an exposé last fall. The pieced examined the alleged tactics employed by Apple internally to steer users toward its own products and away from those of its rivals. (Notably, the paper of record found that Apple’s own apps had been “ranked first recently for at least 700 search terms in the store,” citing search results compiled by the app analytics firm Sensor Tower. “Some searches produced as many as 14 Apple apps before showing results from rivals, the analysis showed,” the Times reported.)

Reed pointed out “Before platforms like the App Store, the journey to launch faced by independent developers was longer and financially perilous. Developers hosted and promote their own websites (as opposed to app store listings); hired third parties to manage financial transactions and legal teams to protect intellectual property; among other steps now made, to a great extent, unnecessary by Apple and Google.” Here also said “the element of trust with which app stores imbue developers who might otherwise be forced to cultivate that reputation individually. “Prior to platforms, software developers often handed over their products to companies with a significant reputation to break through the trust barrier,” he argued.

Reed’s general feelings were shared by Thomas Hazlett of the John E. Walker Dept. of Economics at Clemson University. Here gave testimony that there are benefits to vertical integration “General Motors once purchased car bodies from an independent supplier, Fisher Body; it then acquired Fisher Body and made these components internally.”

“This integration has been explained by economists as an efficient coordination of risky, long-term, complementary investments,” said Hazlett.

The video below shows a concept for a device setup process that enables 3rd party choice in a Mobile Services provider, App Stores, default apps for every category are present in a randomized list with a search bar if you already know what you want.

He went on to argue that Apple’s strategy of bundling its proprietary hardware and software exclusively and thus specifically for the iPod and iTunes was viewed as a threat to competition at the time which gave birth to a sprawling entire new industry.

We know that Apple’s iOS has many hooks that work to self preference its own services over that of others. An example of that is Apple’s Email on an iPhone defaults to Apple’s Mail app > directions default to Apple’s Maps> and music defaults to Apple Music. This practice excludes widely popular alternatives, such as Spotify, Pandora, Deezen and others.

I recently reported on this very thing in “The True Cost of free built-in apps & the App Layer. Part 2”